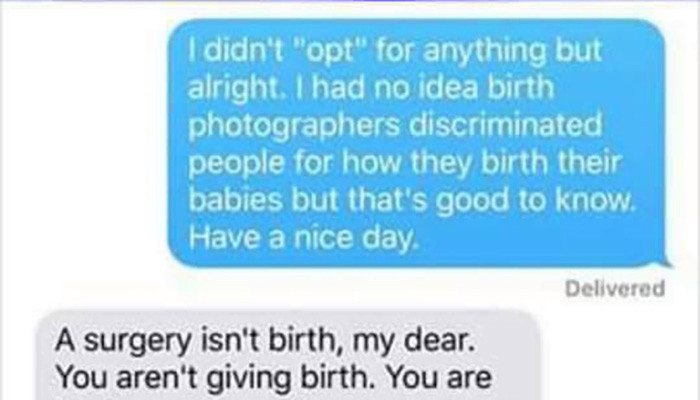 A birth photographer who refused to document a woman’s c-section, has insisted ‘surgery isn’t birth.’

In a post to the Sanctimommy Facebook page, one woman revealed that a photographer she was hoping to hire to document her baby’s delivery, appeared to dump her after finding out that she was going to have a caesarean section.

‘A surgery isn’t birth, my dear,’ the photographer told the mum-to-be in a text.

‘You aren’t giving birth. You are having surgery to remove your baby from your abdomen.

‘That is not birth no matter how you swing it and I for one don’t want to be there to take pictures of it.’

If that’s not insulting enough, the real blow comes when the photographer says she’ll be available if the mum-to-be decides to give ‘actual birth’ a shot.

‘If you decide to give motherhood a go from the get and have an actual birth let me know and we can schedule your session,’ the text continued.

‘This motherhood job is hard, if I were you I would think twice about starting such a job by cutting corners so early in the game.’

The screenshot of the message exchange – which has been shared over 3,000 times – has prompted online outrage with many calling the photographer ‘ridiculous’ and ‘unprofessional.’

‘Wow! I don’t even have words! What a jerk! So, does this mean that I was never born? How about my three siblings?’ one woman wrote.

What’s the most outrageous thing you were told when you were pregnant? Tell us in the Coffeehouse below:

Female Brawl Pops off inside a Nail Shop in Flint, Michigan