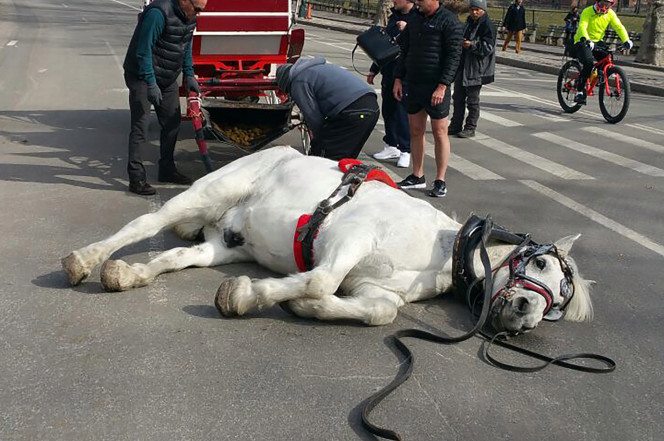 Disturbing images show a seemingly-exhausted carriage horse lying limp on its side after suddenly collapsing in Central Park — and now an animal rights group is demanding an investigation.

Witnesses saw the horse breathing heavily before it collapsed on the ground near Tavern on the Green around 10 a.m. last Tuesday, said a rep for the anti-carriage group NYCLASS.

The group released several photos taken by bystanders at the scene that show the horse both kneeling on the concrete and resting on its side.

“Horses don’t just collapse,” a NYCLASS spokesperson said. “Something happened — and the city should get to the bottom of it and make sure it never happens again.

“They should conduct an immediate investigation into the health and whereabouts of this horse, including allowing an independent vet to examine the animal.”

Carriage driver Chris Emanus put the horse, named Max, back to work on Monday, insisting he’d been cleared by a vet.

“I’ve been doing this for 20 years, and it doesn’t happen that often, but it does happen,” he told The Post.

Emanus, 45, claimed the equine had simply tripped because he was wearing horseshoes for the time in eight months after returning to the city from a farm.

“For eight months he was walking around with no shoes,” he said. “The day it happened, he tripped on a little crack in the pavement. That happens sometimes, they trip on a crack. He tripped and went down, but not hard.”

Emanus said he unhooked Max, who then got up on his own “without a scratch on him.”

Mounted NYPD cops evaluated the horse at the scene, then Emanus took him back to the stable where a vet was called to examine him, he said.

“On Friday, they said he was good to go once the blood work came back and said that everything was fine,” Emanus said. “Today is his first day back. We gave him the weekend off.”

A NYCLASS spokesperson insisted that when horses trip, they don’t collapse on their sides but kneel on the ground and then stand back up.

Christina Hansen, a spokesperson for the carriage industry, accused the group of making “something out of nothing.”

“[The horse] tripped and fell, and he was examined by three mounted officers at the park and was cleared to return to the stable pending a vet exam,” she said. “He was found to be completely uninjured and absolutely fine.”

Julien Martinez, a spokesperson for the Department of Health, said the NYPD informed them on Feb. 21 that a horse had “tripped and fallen in Central Park.”

“The horse returned immediately to its stable and was examined by a private veterinarian who determined Max to be healthy,” the statement read.

Wives Reveal Why They Cheat On Their Husbands

Innocent Man Walks Free After 25 Years Imprisoned for Rape, Murder He Did Not...