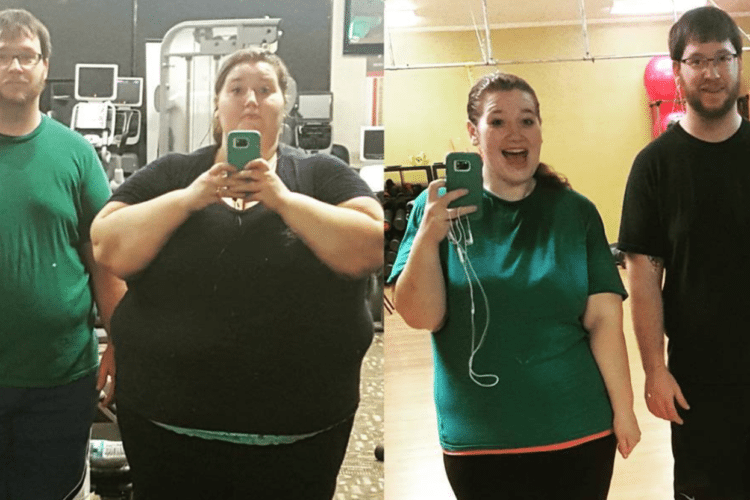 We told you about Instagram-celeb Lexi Reed earlier this month after she and her husband lost nearly 300 pounds and her story went viral.

Now, the couple is sharing a few tips on how they managed the dramatic weight loss.

It all began on Jan. 1, 2016, when Lexi made a New Year’s resolution. At nearly 500 pounds, Lexi knew her health—and possibly her life—were at risk. So, she and her husband Danny decided to take a weight-loss journey together.

One year later, they are happier and healthier than ever.

“We traded in our lazy nights on the couch, eating terrible foods & binge watching netflix for the gym & healthy meals,” Lexi writes on Instagram.

She says in the year since they began their weight-loss journey, they are different people—not just physically, but also mentally. “We are stronger, closer, & will live longer healthier lives together. This journey isn’t always easy, but it’s so worth it.”

It began by not eating out, partying or having cheat meals for the first 30 days, Lexi told local news station WHTI-TV. After the initial shift, it became more than a resolution and instead her new lifestyle.

Here are some tips the couple gave to TODAY for anyone hoping to lose weight:

Although Lexi was working 10-hour days, she still set aside time for the gym. Her advice: Treat it like a meeting on your calendar.

“I just kind of try to set it up like a business meeting. I am my own boss and I can’t cancel,” she said.

2. Find What Motivates You To Lose The Weight

Living a long and healthy life and setting a good example for their future children is what kept the Reeds motivated. Find what motivates you and remind yourself of it every time you need encouragement.

3. Make Sure You Have Someone Who Encourages Your Weight Loss

Staying motivated can be tough, so having someone on the journey with you can make a huge impact. Lexi says when she felt like skipping a workout, Danny encouraged her. If he wanted a break, she talked him into working out.

Using the buddy system while working out or eating can make all the difference if you’re struggling with motivation.

4. Find A Routine That Works For You

When Lexi first started exercising, she told TODAY, she had a goal to do a half-hour of cardio four days a week. She tried to do high-intensity cardio but found that she wasn’t able to. Instead, she just focused on getting in that half-hour of cardio any way she could. At the beginning, that meant walking on the treadmill, stopping when she got too winded, and starting again.

Eventually, it got easier, and now she works out for about an hour five or six days a week, doing a mix of cardio and weight training.

5. Think About “Adding” To Your Diet

Lexi and Danny changed their eating habits to incorporate more lean proteins, like chicken and salmon, and more vegetables. Rather than just focusing on the unhealthy foods you are trying to avoid, it can be helpful to instead think about all the healthy additions you are incorporating into your diet. After all, a replacement or addition sounds a lot better than a restriction, doesn’t it?