I swear, cheaters are just getting lazier every day.

What ever happened to the clandestine texts from a burner phone and the seedy liaisons behind Bed, Bath & Beyond? There’s no creativity in modern-day cheaters.

Check out this guy, for example. He actually left his sleeping girlfriend in bed while on vacation to hook up with some random in the same hotel.

Yeah, Lewis Bloor actually did that. And the reason we know so much is because his GF (or former GF) is Marnie Simpson.

Confused? Don’t be. These guys are like D-team celebs in the UK. They appeared together on “Celebrity Big Brother” after getting “famous” on “The Only Way Is Essex” and “Geordie Shore” (a knock-off “Jersey Shore”) respectively.

So anyway, Bloor crept off in the middle of the night and paired off with some girl he met at the beach. He would have got away with it, too, had she not blown the whistle. Yep, the rando realized who he was, and after the steamy hookup, slid into Marnie’s DMs to call him out.

In a message exchange that has since become very, very public, Simpson wrote,

What does that mean did you do everything else apart from sleep together. Thank you so much I just want to know what happened I won’t be mad at you as you didn’t know he had a gf xx

Then the girl explained,

Yeh everything but and the only reason we didn’t actually have sex is because I didn’t want to if you get me.. Again I am so sorry to message you about this and if there is anything I can do x 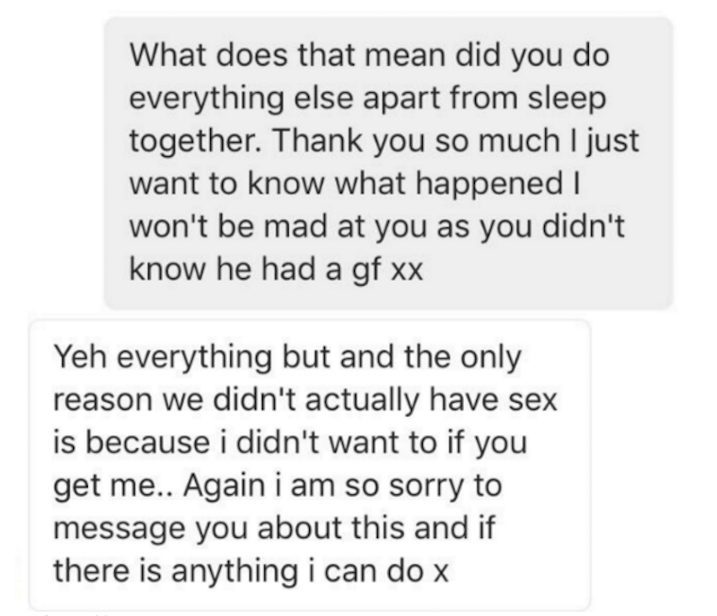 So there is some context behind this. Bloor has tried to weasel his way out by claiming he did what he did because of an earlier incident in the day. Apparently, Simpson’s phone blew up and she made him go meet an old male friend who happened to be on vacation in the same area.

Lewis got jelly that this guy was beautiful in the face and the couple got into a fight. So later that night, he crept out of bed and cheated to make himself feel more “manly.” Yeah, he legit used that word as an excuse.

He told The Sun,

My logic was: ‘I don’t want to forget about this relationship just yet.’ So I did something to feel a little more manly I suppose – how pathetic is that? But it’s true, just because I felt like I was being mugged off. I didn’t do it to spite Marnie, I did it because I felt very jealous and insecure and that it would allow us to continue with the holiday. Crucify me all you want.