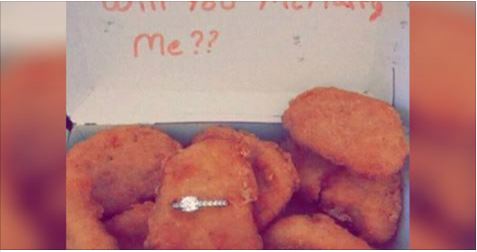 This Illinois woman opened her McDonald’s order to find a nugget that won’t go well with honey mustard.

Karsyn Long is such a fan of the fast food giant that her boyfriend, Kristian Helton, decided to propose with a ring in a box of chicken nuggets.

“She has devoted her life to chicken nuggets, so that had to be part of the engagement. I mean, it was just given,” Helton told news station WAND.

For a proposal fitting of his McDonald’s-obsessed sweetheart, Helton stuck the diamond ring in a chicken nugget and wrote “Will you McMarry me??” inside the box.

She said yes — even though Helton is the first to admit she probably would choose McDonald’s over him.

“Her love for chicken nuggets is I’m sure more than she loves me,” he said.

The couple, who has been together two years, plan to get married next year and they already have a venue in mind — McDonald’s offered to cater the wedding.