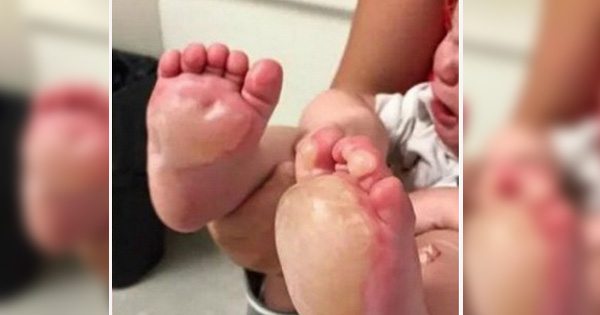 Police have arrested a babysitter in Maryland who has been accused of heartlessly putting an infant’s feet inside a burning frying pan.

According to WSVN, 36-year-old Ismelda Ramos Mendoza of Bladensburg was taken into custody on Monday on child abuse charges.

Authorities say Mendoza did the unthinkable when the infant she was babysitting wouldn’t stop crying.

Investigators say the baby, a 6-month-old little girl, kept crying while Mendoza was trying to make tortillas in a pan.

Frustrated with the infant’s behavior, Mendoza reportedly lashed out, grabbed the crying baby, and stuck her feet inside the burning pan.

According to the Associated Press, when the baby’s mother asked Mendoza about the painful-looking burn marks on her baby’s feet, she actually pretended that she didn’t know what had happened.

The moment Mendoza lied straight to her face, the baby’s mom reportedly called 911 and immediately reported the alleged abuse.

Investigators say the baby girl was immediately rushed to a nearby hospital, where she was soon treated for second-degree burns all over her tiny feet.

This shocking story has since been shared on the WSVN Facebook page, where more than 200 commenters have spoken out against Mendoza’s disturbing actions.

“I can’t..its disgusting all I’m reading is caretakers doing horrible things to helpless innocent kids. I’m so thankful for my family being able to care for my infant son,” one new mom commented.

“Hey babysitters and childcare providers. If working around children upsets you then simply do NOT work around children,” a man wrote on the WSVN Facebook page.

Some commenters were upset that Mendoza actually thought that inflicting pain on the defenseless baby would make her stop crying.

“Sick ppl have no business around anyones children, even her own. I could never understand the logic of hurting someone more when they’re crying will make them stop???” another woman added.

“So u [sic] can’t get the baby to stop crying so u [sic] conflict pain on the baby cause that will make them stop crying…seriously wth [sic] is wrong with people,” another commenter wrote.

“Yeah.. because burning a child’s foot with a frying pan will stop them from crying.. Terrible,” one woman added.

For many moms and dads, this horrific story has completely turned them off to hiring babysitters in general.

“I would’ve had more money and probably would’ve been more respected now, but I raised my children myself. Thank you God,” one mom wrote.

“Thats why i never trust no idiot taking care of my baby . Only his grandma…,” another commenter added.