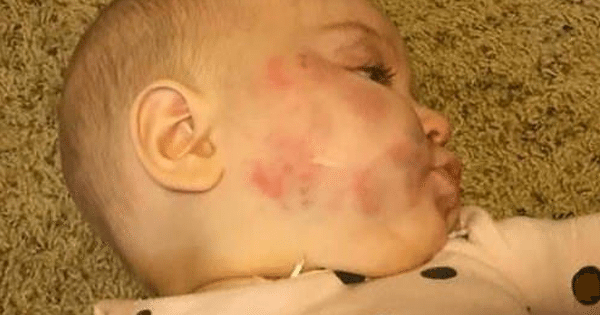 Staff members at a daycare center in Montana are under fire after a child came home with bite marks all over her tiny body.

According to ABC Fox Montana, Tracy Blinov and her husband received a call from Busy Hands on Friday night, saying their baby girl Eliana had been bitten by another child.

When the couple arrived at the daycare center to pick up their daughter, they were horrified to find that Eliana had about 10 bite marks all over her face and body.

“My initial reaction was very heartbroken, but I understand kids are sometimes kids,” Blinov said. “I had no idea the of the severity of it, initially. They made it sound like it was just one bite mark.”

Blinov and her husband immediately asked to see the surveillance footage, which showed them that Eliana had been bitten by a 2-year-old child for a minute and 29 seconds before a staffer at the daycare came home to help.

While Blinov and her husband are still unsure if they want to press charges against Busy Hands, they do say that Eliana’s injuries were serious enough that she needed antibiotics.

According to ABC Fox Montana, a petition has since surfaced online from Change.org, entitled “Shut down Busy Hands Drop In daycare so no more children will be hurt!”

Missoula Police have also confirmed that the daycare is under investigation and child protective services are also involved.

One of the owners of Busy Hands has confirmed the timeline of the attack but asserts that the staff member immediately broke up the incident once she heard Eliana’s screams.

KTVQ shared this horrific story on Facebook, where dozens of parents are demanding that the daycare shut down immediately.

“Shut that place down!!! No excuses for poor quality care . Period,” one commenter wrote.

“I’d be livid! There’s no excuse for that. If it were a responsible day care there’s absolutely no way the children would have been left “Alone”…. That baby would have cried and I find it impossible that A Day Care Worker Did NOT hear something…. There’s definitely more to this story,” another added.

Missing teen was gang-raped, killed and fed to gators