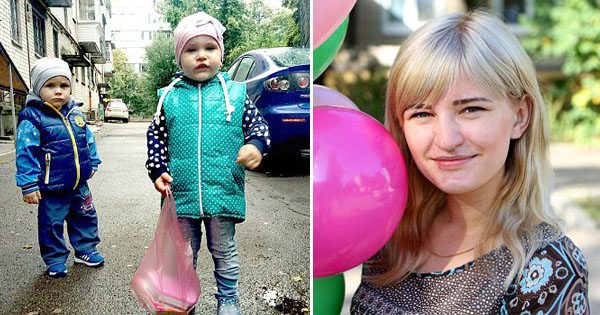 20-year-old Vladislava Podchapko left her children, two-year-old Anna and 23-month-old Daniil, alone without food for nine straight days in their apartment in Kiev, Ukraine, as reported by Daily Mail.

Daniil died from hunger after six days; Anna remained alive yet critically weak with Daniil’s dead body for the next three days.

Vladislava reportedly left her children to be with her lover.

Anna was taken to the hospital and was very exhausted and frail from being starved. Doctors were relieved that she miraculously got through nine days without eating alive.

According to Daily Mail, one of the doctors involved in Anna’s case said, “She was immediately taken into hospital where we started intravenous feeding. She is better now and we can say that she will live. We have started her on tiny amounts of solid food.”

Although the children were heard crying, pulling, and tearing at the front door by neighbors, they claimed that they reported it to the police, who failed to respond.

Both claims regarding the neighbors’ call and the failure of police are unconfirmed. The children ended up not getting rescued.

According to reports, they were found when Vladislava finally came back home. Authorities have detained her and are now facing up to eight years in prison under the charge of child neglect. She reportedly said, “I didn’t know that children could die.”

Numerous reports rose regarding the cause that lead up the mother’s neglect, aside from just being with her lover.

According to Nikolay Kuleba, representative for Ukrainian children rights, Vladislava removed both Anna and Daniil out of kindergarten and social services representatives didn’t do a follow-up and investigate the cause of removal.

The lack of food also confused them, as the mother, who’s somehow active in social media, showed off her iPhone 6.

She also did not express any alarming behavior or contempt towards her children. Her account contains a lot of toddlers’ photos captioned with heartfelt messages.

Daily Mail reports that Anna will now be investigated by social care workers. She’s reportedly carrying a third child with her new lover. She had her two kids from a previous relationship.

‘Perhaps she will be sent to an orphanage, or given for adoption, or if her father can look after her, she may go to him,’ said a source obtained by Daily Mail.

Social media users have been unfriendly towards Vladislava and have been leaving contemptuous comments on her account.