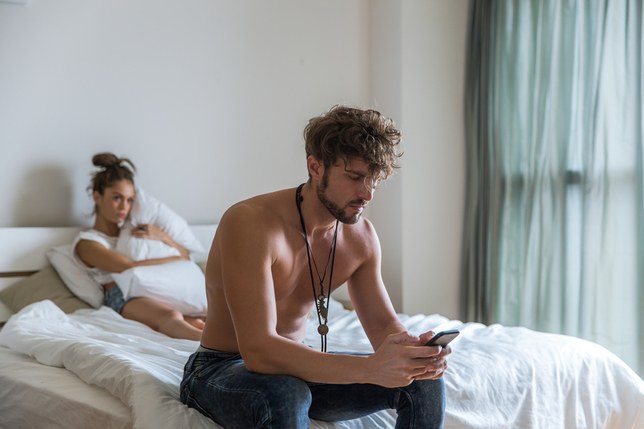 Most of us tend to give our partners the benefit of the doubt as far as fidelity goes. But the truth is, one in four relationships involves cheating, while only half of cheaters confess—which means that about one-eighth of the people in relationships are involved with someone who secretly isn’t monogamous.

You probably know the obvious signs of cheating, like remaining on dating sites long after getting into a relationship or always coming home late without a solid excuse. But in order to really ID a cheater, it pays to watch for signs that aren’t as overt.

Here are 13 indicators that your partner could be sneaking around behind your back:

1. Your relationship started off as an affair

There’s some truth to the saying “once a cheater, always a cheater.” John, 44, says he should’ve seen it coming when he got into a relationship with a married woman. “We were good in bed together, but she enjoyed being good in bed with others, too, apparently,” he said.

2. They regularly accuse you of cheating

Beyond being classic projection, this tactic serves two purposes, says Healing Infidelity Coach Caroline Madden, LMFT. It puts you on the defense so you don’t have the chance to consider the opposite possibility, and it makes them look so anti-cheating that they couldn’t possibly do it to you. It could also be a genuine reaction to them realizing that since they got away with cheating, you probably could too.

3. They’re taking out a lot of cash

Cheaters often use cash when they take their secret partners out so that their S.O.’s can’t track where they’ve been, says Rhonda Milrad, founder and chief relationship advisor of Relationup. But if you share a financial account, what you can track is an spike in their ATM withdrawals.

Of course, it’s possible they’ve just been doing their research, so this alone is reason only to be glad they’re learning new ways to please you. But other signs of cheating combined with a change in sex routine could mean they’re picking up those new techniques from someone else, says Milrad.

5. They’re suddenly hyper-critical of you

Cheaters will sometimes try to justify cheating by making their relationship out to be so bad that they had no choice, explains Madden. She typically sees this happen in situations where the cheater feels they’re in love with their cheating partner, since they have a sense that their affair is happier than their relationship. “The usually nice guy acted super cold and mean and I had no idea why,” says Katie*, 29. “I thought I did something wrong. Now, I understand that he was feeling an incredible amount of guilt and shame, and was taking it out on me by acting mean towards me.”

Madden’s clients are often surprised to find their partners are cheating because they thought everything was going well around the time the cheating started. But sometimes, the reason things are looking up is that the needs that weren’t met in the relationship are being met elsewhere.

Once people feel secure in their relationships, they may put less effort into trying to look good for their partners. If your S.O. is once again hitting the gym, buying new underwear, or shaving, they could be back in that early stage with someone else, says Madden. Julie, 42, noticed her ex was spending a lot of time in the shower during his affair.

8. They forget what stories they’ve told you

If your partner frequently starts stories with, “Did I tell you this already?” it could mean they’re having trouble keeping track of multiple confidants, says psychologist Colleen Long, PsyD.

9. They’re confiding in you less

Becoming less inclined to discuss problems with you is a sign that your partner’s been venting to someone else, says Long. Even if they’re not sleeping with anyone else, this could point toward emotional cheating.

10. They keep strict tabs on your schedule

Lauren, 33, says her ex started to ask when she was coming home from work more often when he was cheating. Now, she sees he was trying to figure out when he and his cheating partner would have the place to themselves.

11. They have random new interests

“My ex had been content to listen to about eight songs, total, during our entire time together,” Julie remembers. “A bunch of new CDs without any writing to identify their contents—and a sudden interest in a whole host of new music—was due to the influence of this new partner.” Attachment to a particular place can especially be a giveaway: Julie’s ex insisted on joining a gym because of a climbing wall when he didn’t even climb. It turned out his secret girlfriend was a member.

12. Cheating was accepted in their family

Looking back, John thinks his ex’s parents should’ve been a clue. “She came from a family where her mother and father both cheated on each other and she told me that,” he says. “But her parents were still happily married. So they set an example for their daughter to follow.”

13. They get irate when you try to confront them

Someone who hasn’t cheated will likely have a good explanation for their suspicious behavior, reassure you, and do what it takes for you to feel safe. A cheater, however, may get defensive because you’ve blown their cover, says Milrad. “It is very common for cheaters to deflect responsibility and get irritated by your questions. They often try and shut you down and even criticize you for being too controlling or suspicious.”

Mother Of Two is Completely Horrified At What She Finds, After Coming Back From...