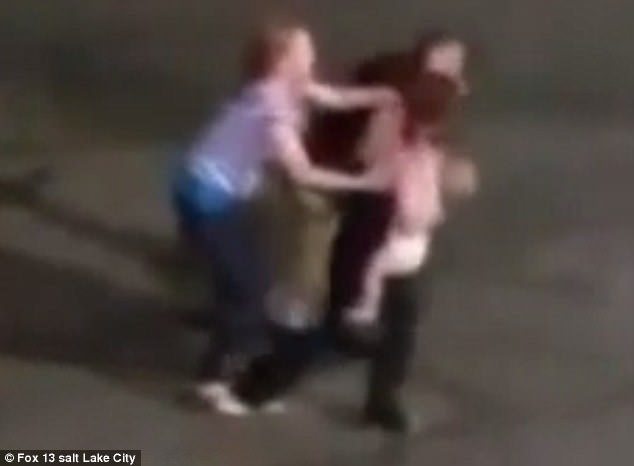 TWO parents have been put behind bars after being filmed in a tug-of-war involving their baby.

Parents Arrested After Distressing Footage Shows Them in Tug of War With Baby pic.twitter.com/pSqOHiHY2d

Britnie Haas and Elias Holt were seen fighting over the 11-month-old boy in a hotel car park in Utah, USA.

The footage, recorded from inside the building, shows Haas with the infant on her hip as she argues with Holt.

Holt is seen trying to take the baby from her although it has not been confirmed who had the baby to begin with or why the argument started.

A second woman, identified as Holt’s aunt Melinda Ylinen, can be seen trying to intervene but it appeared Haas violently lashed out at her multiple times.

She claimed that Holt had the baby to begin with but that Haas then took the child from his arms after it was suggested he be taken inside.

She is also seen attacking Holt during the scuffle and can be heard screaming at him as they wrestle for control of the baby.

The New York Daily News reported that the couple were from Utah and that the fight took place outside of La Quinta in Orem.

Ylinen told Fox 13: “When I was saying to him, ‘Let me take the baby inside,’ that’s when she grabs the baby out of his arms so violently.

“The baby was really low on her hip, and he was bowing backwards, and I was afraid his back was going to snap.”

Haas and Holt were then arrested on Friday with the mother facing charges of child abuse, domestic violence in the presence of a child and assault.

Holt was arrested on a previous warrant and authorities confirmed the baby was not harmed during the fight. He is now being cared for by a family member.

Craig Martinez, from Orem Police, said: “It was disturbing in the two minutes it was being filmed. We are going to use the video as evidence in our case as to why we filed the appropriate charges.”