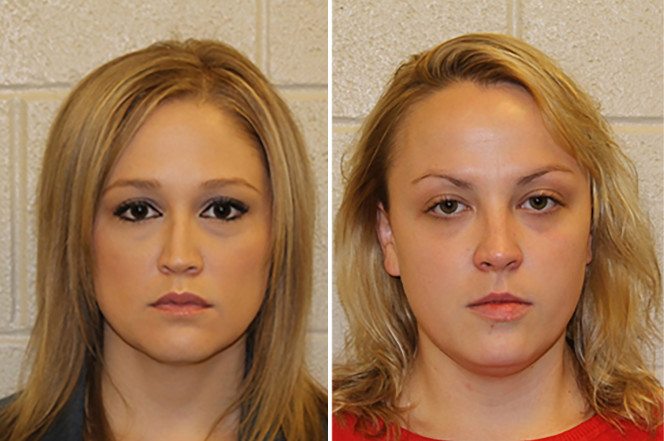 The unidentified student, now 19, detailed the relationship he had with former Destrehan High School teacher Shelly Dufresne, 34, that began when he was a 16-year-old student in her English class. The month-long affair began with a Facebook message from Dufresne after the teen was out sick one day in August 2014, he testified, and quickly progressed to the student and teacher kissing in a classroom within days.

“Later on that night was the first time that Shelly and I had intercourse,” the teen told Judge Danyelle Taylor of the 24th Judicial District Court on Tuesday as Dufresne’s trial began. She has pleaded not guilty to two counts of carnal knowledge of a juvenile, the Times-Picayune reports.

If convicted, Dufresne faces a maximum sentence of 10 years in prison and a $5,000 fine.

The night of their first tryst began, the teen said, when Dufresne picked up the teen from his home in the New Orleans suburb of Destrehan after a football scrimmage. He testified that the teacher then drove to an isolated location behind a daiquiri shop, where they had sex.

Prosecutors say Dufresne coordinated the trysts using a fake Facebook profile under the name “Madison Mexicano,” complete with an image of the cartoon character Speedy Gonzalez as the profile image. The cover photo also included the phrase, “I love Mexican boys,” a reference to the teen, prosecutor Rachel Africk said. The teen later testified Tuesday that he didn’t appreciate that reference, however, since he is half-Colombian and half-Caucasian.

“All three of us were in bed together,” the teen told the court. “We all started having sex.”

“It was kind of like proof,” he testified, adding that he showed the video to some teammates on the high school football team. “I told them about it, but they didn’t believe me.”

Defense attorneys, meanwhile, accused the teen of committing a crime himself by recording himself touching Respess as she slept and later showing that video to his teammates. They also accused the teen of not being truthful about his relationship with Dufresne, questioning the exact date that their sexual relationship began and arguing that the dates and locations provided by authorities were incorrect.

Investigators were unable to recover the alleged video of Respess sleeping because the teen admitted deleting it, as well as other photos and text messages. He did so, according to McElwee, because he knew what he did was illegal.

“You know it’s a crime to video someone without their permission?” she asked.

Earlier Tuesday, McElwee suggested that the teen threatened to expose their relationship after she corrected him in class one day.

“At any moment, I can expose this, and you can go to jail, and you’ll lose your life as you know it,” McElwee claimed the teen threatened.

And the lewd video of Respess, according to McElwee, was an act of revenge for a problem he had in her class a year earlier.

“He told the cop he got payback,” McElwee said of the teen, later telling the court he had not faced any consequences for his actions.

Prosecutors rested their case late Tuesday and Dufresne’s trial is expected to wrap up on Wednesday, the New Orleans Advocate reports. Dufresne has already pleaded guilty to a lesser charge of obscenity in St. Charles Parish, where she and the teen lived.