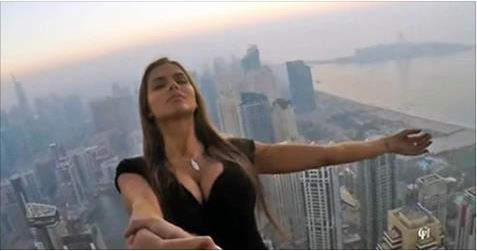 The Russian model who came under fire for dangling off one of the world’s tallest skyscrapers was forced to promise cops she would never try a stunt like that again.

Viktoria Odintsova recently signed a written statement vowing never to repeat the dangerous feat, which garnered a frenzy of attention on social media, The Sun reported.

“The actions of the Russian woman put her life at risk,” explained Major General Halil Ibragim Al-Mansuri, of the Dubai police.

Two weeks ago, the brunette looker, 23, posted videos and photos on Instagram that showed her risking her life by hanging off the 73-story, 1,000-foot-tall Cayan Tower in Dubai.

In the shots, Odintsova clutches the hand of a male pal as she swings in open air off the skyscraper, which was considered the world’s tallest building in 2013.

“Putting 2 people’s lives at risk plus how many people walking below if she fell to the ground,” one commenter wrote. “Stupidity at its finest.”

Don’t forget to read more crazy stories at our site.