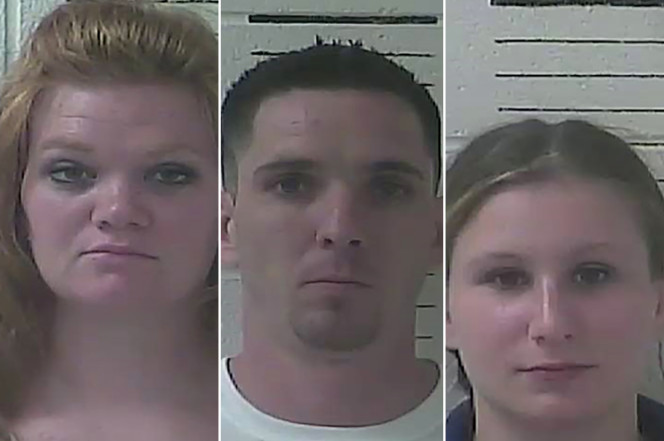 Hancock County Sheriff Ricky Adam said the trio — Amy Hammers, 19, of Pearl River, Louisiana; Tiffany Thibodeaux, 26, of Biloxi, Miss.; and Brandon Mabery, 30, of Kennedale, Texas — were busted having sex on the deck of Triple D’s, a Creole seafood restaurant in Kiln, by the owner last Wednesday.

“Right there,”Adam told the Sun Herald. “In the middle of the day. In broad daylight. In front of God and everybody.”

Chief Deputy Don Bass told The Post the restaurant was closed at the time, but he couldn’t explain why the three people picked the deck for their tryst.

“I guess it’s kind of scenic, it is on a bayou,” Bass said. “It’s kind of romantic, but no, there’s no rhyme or reason here.”

Bass said none of the three had worked at the restaurant, which remained closed Tuesday. It was unclear how long they had been in the restaurant before the owner called police, who broke up the steamy encounter when they arrived.

“I can’t imagine the stunned looks on their faces at the time when they saw our deputies,” Adam told the Sun Herald.

“I’d hate to have to tell Mama and Daddy I got arrested for such as that.”

All three were charged with misdemeanor counts of indecent exposure. They were later released on bond, Bass said. It’s unclear whether they’ve hired an attorney and their next date in court has not been set.