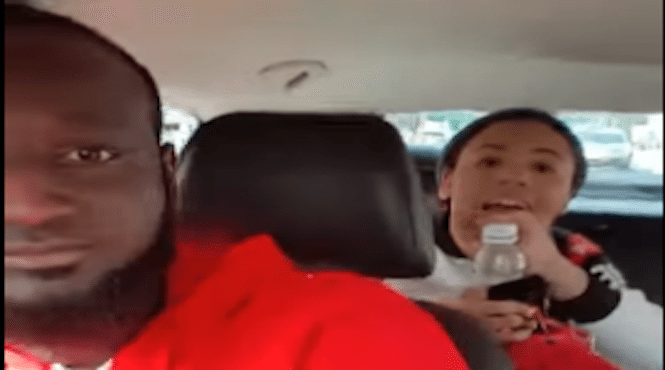 BRONX, NY — An unidentified Uber passenger flew into such a rage over the lack of a phone charger in her pick-up car that she threatened to beat herself up, scream for help, and say that the driver was raping her.

While the driver calmly attempts to explain that he neither has a phone charger nor is he required by Uber to provide one, the incensed client in the backseat wails nonstop. Among her lowlights:

• “I’m going to start screaming out the window that you’re raping me, that you raped me.

• “I will punch myself in the face and tell the cops you did it! You wanna play?”

• “Go back to your country! Donald Trump going to send you and your family back! Get the f–k out of my country!”

Throughout it all, the driver smiles into the camera and tells the woman to go ahead and call the police.

When the rider finally realizes she’s on camera, she punches the car seats and yells: “Why are you recording me? He just hit me in my face!”

Eventually, she bails from the car, and the driver addresses the camera to let off some steam. He says:

“You see these stupid b–ches. You see what she did. Stupid Bronx b–ch. See, people?! I’m not saying all the females, some b–ches like this. F—ing thot. This is Uptown New York, man. Bronx. We got stupid b–ches out here. Sorry for my language. This is [what] Uber drivers go through every f–king day, man. People would disrespect us, talk s–t to us like it’s nothing, man.”